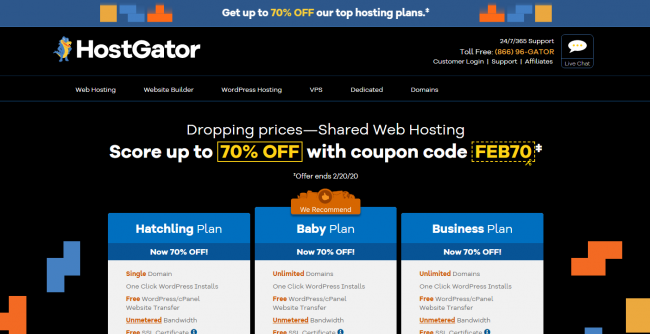 As a technology and product innovator, HostGator is able to provide its more than 150,000 customers with innovative products and services designed to complement their existing businesses. HostGator serves customers ranging from individual freelancers to Fortune 500 companies in more than 170 countries.

Because of the nature of reseller hosting, HostGator customers are frequently web designers and or developers who have chosen to provide hosting services to their clients. Businesses of all sizes and shapes frequently make use of HostGator’s affordable, but still powerful shared, reseller, and dedicated hosting services. Customers range from complete novices to computer and technology experts.

In order to keep up with the company’s rapid growth, HostGator moved from its original office in Boca Raton, Florida into a new 20,000 square foot office building in Houston, Texas. Since moving to Houston in January 2007, the company has added more than 200 employees. The company is growing rapidly and expects to add roughly 200 employees within the next two years.

In a June 2008 customer satisfaction survey, approximately 90% of HostGator customers reported being satisfied with HostGator and the services it provides. Industry-leading customer service and support is at the forefront of what HostGator does on a day-to-day basis. The company is constantly working to improve and refine that service and support and achieve its goal of becoming the world leader in the global web hosting market.

HostGator has chosen The Planet to be its exclusive data center and network provider and has since become The Planet’s largest customer. HostGator’s long standing relationship with The Planet allows HostGator customers to utilize one of the world’s best networks to power their web sites and ensure maximum uptime. The Planet’s world-class datacenters feature state of the art security, power, safety, and cooling systems – all designed to ensure that service remains uninterrupted.
Data Center Features

HostGator houses servers in four of The Planet’s Dallas, Texas-area datacenters. Ranging from 22,000 to more than 78,000 square feet, these world-class datacenters contain top of the line technology to ensure that servers stay cool, secure, and up at all times. The datacenters feature redundant power, HVAC, and fire detection systems, and are monitored 24/7 by both HostGator and The Planet’s Network Operation Centers.

In addition to a fully redundant network and top of the line data centers, HostGator system administrators monitor all servers 24 hours a day, 7 days a week. Servers are monitored and issues are acted upon before they become serious. Additionally, the network and datacenters are monitored and managed by on-site technicians dedicated to ensuring maximum uptime and reliability.